The Tiger is an apex predator as we all know, it is widely believed that efforts put towards saving the tiger and its habitat would in turn save all the other flora and fauna. For quite some time I believed this was a golden formula and could help in conserving the natural world by taking a few simple steps. It was only when I read an article where India’s eminent birdwatcher and author Mr. Bikram Grewal was interviewed did I realize, that this idea was wrong! He rightly said that protecting the tiger habitat would surely help in conserving the birds that reside there but we would leave out numerous important habitats such as that of the Great Indian Bustard, Lesser Florican and many other such birds. Several bird species battle against effects of anthropogenic actions on an everyday basis in order to survive and reproduce. Conservation of habitats other than various types of forests is therefore extremely crucial.

Few of the major problems with habitats today are that either most of them are being converted into agricultural land, waste lands, being used for other commercial purposes, or are severely polluted by oil spills, discharge of poisonous effluents especially in case of wetlands and water bodies. Apart from physical harm done to the habitat, human actions also directly affect the lives of birds. On a regular basis, many birds are illegally captured and sold as pets, waterfowl such as gadwalls, pintails are often killed for consumption. Other than these issues, we have one more menace that is growing in its concentration and that is air pollution! Multiple studies have shown that birds respond to environmental change before humans can even notice it. This is why birds are invaluable indicators of the health of our environment.

Almost all of these problems can be observed and analyzed, however a research to study the impact of air pollution is comparatively complex. Only a handful of studies have been conducted that assess the impact of direct exposure to air pollutants on bird health. When it comes to the effect of invisible airborne pollutants, the effects are difficult to trace back. The complexity also exists due to the presence of many variables such as types and levels of air pollution, dynamic atmospheric conditions, species-specific responses, and the difficulty in differentiating between direct versus indirect effects of air pollution can confound even the most basic efforts to assess how birds fare when exposed to chemicals in the air.

Coal mines in earlier days did not have ventilation systems, nor was there any equipment to measure the level of toxic gases in the air. They needed a sentinel species to do this job for them, canaries, like other birds are good early indicators of poisonous gases. Miners would carry caged canaries into mine tunnels to monitor the invisible dangerous gases such as carbon monoxide and methane that got collected in the mines. As long as the bird was singing, everything was good but if the caged birds showed any signs of distress or died, it worked as a warning for miners to evacuate. Though the metaphor ‘canary in a coal mine’ is still in use, this technique was eventually replaced by high tech gadgets that measured the air quality and the lives of birds did not have to be sacrificed or put in danger. 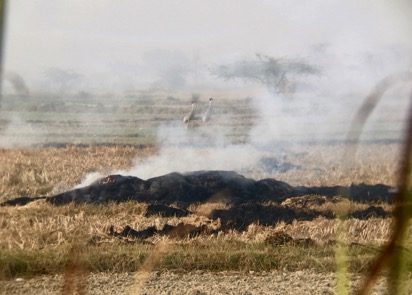 Sarus Cranes and a burning field

I hadn’t carefully looked into the effects of air pollution on birds till the time I went birdwatching in Uttar Pradesh. It was the beginning of December in the year 2016 and I was lucky to be birding with the most seasoned birders at the Bah-Etawah-Saifai wetlands in Uttar Pradesh. The region has one of the most healthy populations of the tall and elegant Sarus Cranes and several other wetland birds. We observed close to 40+ birds on 2nd December 2016 and close to 50+ birds on 3rd December through this area.

While we were on our way to the main birding spot, we noticed a few birds on an agricultural land by the main road and stopped to see them. We were a huge crowd so I decided to walk a bit further and that’s when I noticed smoke coming from a farm where crop residue was being burnt. On moving closer I realised there was a family of three Sarus Cranes obscured by smoke, it was a pair of adults accompanied by a juvenile. That scene would’ve given me a very artistic image but it was disturbing to see the wonderful habitat being polluted. I didn’t have my camera at that moment but I wanted to document this so I digiscoped my phone on my binoculars to capture the scene. 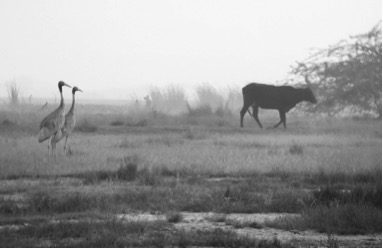 India is a permanent habitat for this non-migratory bird and it is under threat due to loss of habitat, unsustainable agricultural practices and rapid unplanned urbanisation.

Some of them have been fined for it but the practice has still not been eradicated. It was surprising to know that a lot of farmers carry on the burning inspite of facing monetary losses not only in terms of fines but also because the farmland losses its fertility and such land requires more urea and chemical fertilizers for the next cropping.

There is an urgent need for awareness among the farmers and locals on the effects of stubble burning on wildlife and how they can use alternative methods of treating stubble (happy seeder, rotavators, straw reapers for managing straw in a sustainable manner) so that well-being of both is ensured. It is important to point out the health hazards of stubble burning to these farmers as well as the extra financial cost that is incurred due to the damage done to the topsoil as well as the air quality.

A lot of things today are aggravating the air pollution in the atmosphere. Someone in a village cooking a meal on a chulha, a farmer burning the remains of the last crop, a street cleaner in the city burning garbage openly, a car emitting poisonous gases or a huge industrial area covering its surroundings in a blanket of smoke, they are all a part of the problem. The effects of all these actions are not limited to the people who cause it but affect every other living being on this planet.

Over the month of November (2017), Delhi and areas around it saw the worst air quality since 1999 and a Health Emergency had to be declared. The particulate matter in the air was way beyond the recommended limits and posed health hazards for everyone exposed to it.

Elizebeth Muller, the executive of Berkley Earth said that it was really fascinating to know that this pollution is not contained in the cities and it doesn’t even seem to be coming from the cities. In fact, much of the pollution is coming from farms in nearby states of Punjab, Haryana, and Western Uttar Pradesh. With the rice harvest over, farmers are burning crop stubble — specifically the remnants of the rice crop to prepare the fields to plant wheat and return nutrients to the soil.

The pollution from nearby states is mixing with the pollution created in the city resulting in such hazardous air quality. The image below shows the air quality measurements from 8th November 2017 from Delhi and the areas surrounding it. 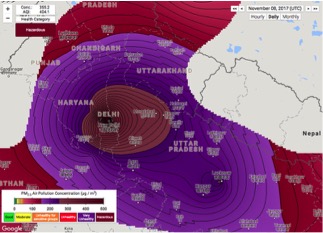 To understand the repercussions of such pollution levels on birds, a review of literature on this subject shed some light on different studies conducted across the globe and their findings. Almost all studies clearly highlighted the gaps in understanding this subject due to its complexity.

It has been hypothesized that because the respiratory system of birds is so much more efficient than ours, they are going to more readily pick up air pollutants.

A research suggested air pollution adversely affected the egg shell thickness, egg volume, clutch size and hatching success in certain birds such as the pied flycatcher. Another study showed that indirect effect of air pollution through the diet indicated that metals have detrimental effects on birds close to the pollution source and resulted in lowered fledgling success and body mass.

Action to resolve this problem or at least to make it less severe is of utmost importance not only for the benefit of wildlife but for our lives as well. The rate of urban migration, growth of population and usage of vehicles are only going to increase the emissions with every passing day. There is an urgent need to switch to cleaner technologies and more efficient and sustainable farm practices. Action has to be taken for, with and by the people at the grassroots in order to curb the menace of stubble burning which has been highlighted above. We owe the future generations the right to live on a planet where they can breathe clean air and enjoy the bountiful beauty of nature the way we do today.