The morning of 23rd September 2011 – the penultimate morning of my 3 week safari to Southern Africa. And the Botswana wild gave me a send-off to remember – just as I had begun to miss Mumbai, I was given an invitation to extend my stay in a style unique to the wild world.

The morning began on a mysterious note – while watching a bull elephant in musth, we heard a strange call behind him. My guide, Ona was hearing a call like that for the first time – that made it baffling enough. As we approached to investigate, it turned out to be a pair of Verreaux eagle owls with a fledgeling.

Just then, we got a radio message of a pack of wild dogs at the camp where we were staying. We were told that the dogs were highly mobile and were asked to hurry if we wanted to see them. As we hurtled over the dirt roads and through dense undergrowth, the voice on the radio exclaimed with excitement again – the pack had made an impala kill. Ona, who was already driving fast enough to force me to hang on to all my camera equipment (I normally return every alternative evening bruised black and blue from banging into various parts of the jeep), somehow managed to increase speed. 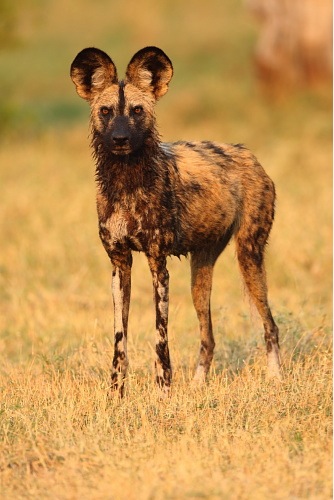 The atmosphere bristled with the tension of killers on the prowl… giraffes running in every direction, herds of elephants closing ranks around their young calves, impala covering impossible distances in each jump, tsessebe redefining speed and the baboons creating a ruckus in the safety of trees. There was a massive exodus of herbivores away from the general direction of our camp – the wild dogs were making their presence felt.

Within minutes, another radio message – the dogs have finished feeding and are again highly mobile in a north-easterly direction. As we changed direction, within seconds there was another voice on the radio, this time incredulous – one more impala had been killed and the alpha male was feeding on it near the staff quarters of the camp. The Land Rover creaked and groaned in agony as Ona exhibited some more insane cross-country driving. As we neared the spot, two more voices on the radio – “alpha male has left kill practically untouched and is now mobile in north-easterly direction again” and “pack has brought down another impala”. Ona threw up his hands in despair and my heart sank… just as we seemed to near the action, the theater was shifting somewhere else. Maybe my bushveld karma was deserting me. But again we went, careening over fallen logs and rocks, with our heads banging on the roof as we spent most of our time in mid-air.

But seems the bushveld karma hadn’t really deserted us – it was just testing our patience. To my left, I could see a part of the pack tearing into something. As I shouted “9 o’clock!”, Ona was turning the car and looking at the sun to determine the best position for photography. Still in mid-air, I was trying to exchange my 300mm lens for the 200mm lens as the dogs were going to be very close – the focus setting was being changed to continuous-servo and the f-stop was changed to get a higher depth-of-field. Before we came to a rest, the camera was already firing away at 12 frames per second – the dogs took exactly 2 minutes to tear apart the impala. I had fired away 350 shots in those 2 minutes! 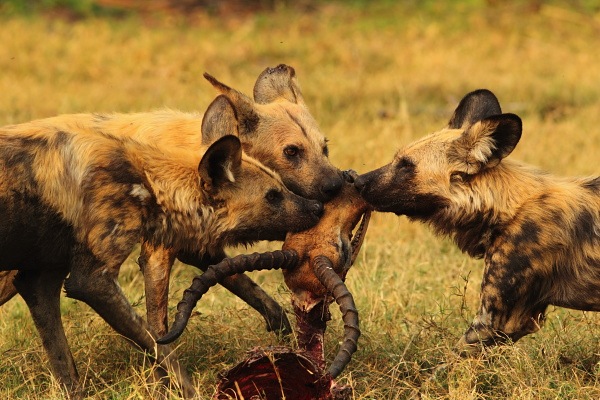 Ona said that the wild dog pack we were watching had 26 individuals – 11 adults and 15 cubs. This time the 11 adults had torn into the impala while the 15 cubs had been left behind. As one-by-one the adults left to rejoin their pups, we turned to go back to the other impala kill which the alpha male had barely touched thinking that they would come back to feed on it as well. Just as we turned away from four of the adults, a guide in another car (which had stayed with the adults) 100 meters behind us screamed on the radio “Warthog!”. Ona instinctively turned the car asking me to get ready as seemingly the dogs had brought down a warthog. We reached the spot to find an adult warthog being torn apart by wild dogs from four different directions. The warthog was squealing away, his eyes pleading for mercy from impending death – but this was the harsh wild where mercy is a strange concept and there is no place in the food-chain for even a trace of compassion. The warthog was literally eaten alive in front of our eyes – his tough skin meant that it took longer for him to die, even as the dogs tore into him from all sides. 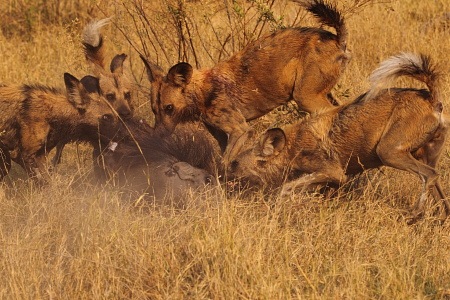 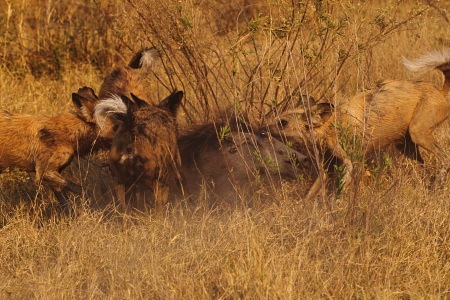 As the last dog left the warthog, we left the scene to rush to the pups who by now were being fed by each adult as they reached the pups and regurgitated their meal.

It was the best of the wild, it was the worst of the wild. The morning had been surreal in its brutality and mind-numbing carnage, but it was a first-hand demonstration of the supreme hunting prowess of a fast-vanishing species. A mere 30 minutes had seen the squandering of five lives, a warthog and four impalas, including one unborn. But perhaps squandering is the wrong word, because those five fed fifteen. Fifteen pups were no longer hungry, and a dying species would live to see another day.