There are a few tiger reserves and national parks in India more famous than their counterparts. Every starched little Indian student will rattle off the names for you – Jim Corbett, Ranthambore, Sariska, Kaziranga, Periyar, Kanha – and if you’re lucky or they’re an exceptional student, maybe a few more. Kanha has been called the best-managed park in India, and from the time I first visited it in 1996, I became a loyalist. In 2006 I had visited Bandhavgarh, but the crowds around the tiger sighting left me unimpressed to say the least. I stood firm in my Kanha loyalty, but I couldn’t keep ignoring the reports of great tiger sightings in the park next door. It wasn’t till 2010 that my allegiances changed.

On the morning of 19th May 2010, the first day of my second visit to the park, the Jhurjhura tigress, who had raised two litters already and was then mother to three five-month-old cubs, was found dead. I attended the post-mortem and then her funeral, a detailed account of which can be found in my report here [link]. Despite the tragic absence of an important female, and the closure of half the main tourism zone to protect her cubs, Bandhavgarh did not fail me. Far from it, in fact – its history, mythology, flora and most importantly fauna got me completely hooked. The experience far surpassed all and any expectations I had gone in with.

In May 2010 the rumours that inexorably drew me were of the legendary fourteen year old male tiger, B2. Fighting off many rivals to gain and keep a large territory with potential mates and a good food and water supply, B2 gained himself a strong reputation and a huge fan-base. But now he was aging, and the Bamhera male was slowly pushing him back from his own territories. Also, in fourteen years of annual visits to Kanha, I had never managed to see tiger cubs, so imagine my excitement when I was told on reaching Bandhavgarh that there were at least two tigresses with litters in the Tala zone alone. They were being seen regularly, and for once Lady Luck didn’t fail me.

It was late afternoon, just 45 minutes before the park was scheduled to close, and the fading sunlight cast a soft glow over everything we saw. About 120m away, hidden in the tall yellow grass, lay the Chorbehra female and her second litter, sound asleep. I could barely see their otherwise sharply distinctive stripes, a standing testament to the wondrous effectiveness of the tiger’s camouflage. As I strained to make out the figures, the tigress smoothly arose, disturbing the cubs as well. The lithe body of the tigress began loping away, making noticeable the distinctive limp that had given her the name Langdi, the Limping Tigress of Bandhavgarh. Her two cubs forgot all about sleep and followed her, gamboling energetically. It had been a short sighting, in poor light, from a long way away, but it was my first tantalizing glimpse into the family life of this elusive animal, and it had left me starving for more. Fortunately, I did not have long to wait.

The next sighting was really my lucky day – it was as if the family was choosing to put on a show for me. I saw Langdi and her 6-month-old cubs in the Siddh baba meadows near one of Bandhavgarh’s many overflowing streams. The family slept peacefully, till one of the cubs woke up and decided to cool down in the stream. It was closely followed by its mother, and finally its sibling. To my delight, instead of walking away like last time, the tigress began to walk towards the road and our jeep. A tiger mother is fiercely protective (much like Indian mothers), but we were clearly beneath her dignity, and she simply sauntered past us. I managed to get some excellent pictures of her, before turning my attention to her cubs.

The cubs waded through the stream, their heads bobbing above the water as they skill-fully navigated their way onto some nearby rocks. Their games again seemed expertly engineered to provide me with the best possible photo opportunities. One cub found a jute bag lying around and decided to use it as a chew toy while the other leapt around the rocks, making faces at me like a mischievous child. The mischief continued and by 6:30pm, both the cubs had jumped on to the same rock, and were playing tug of war with their new toy. 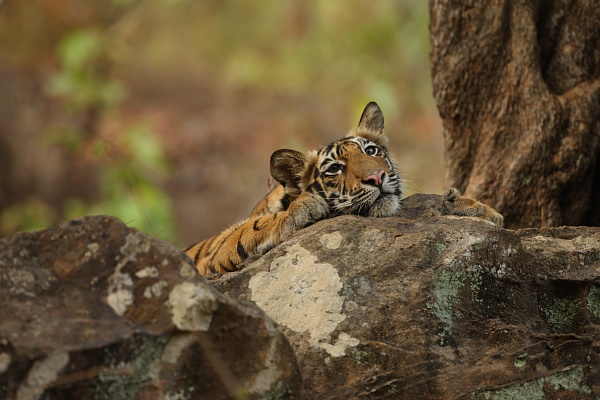 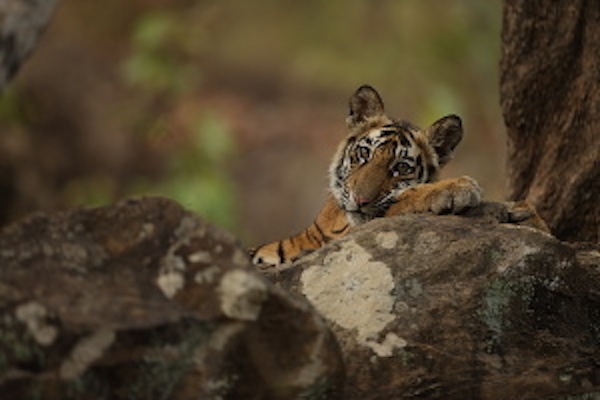 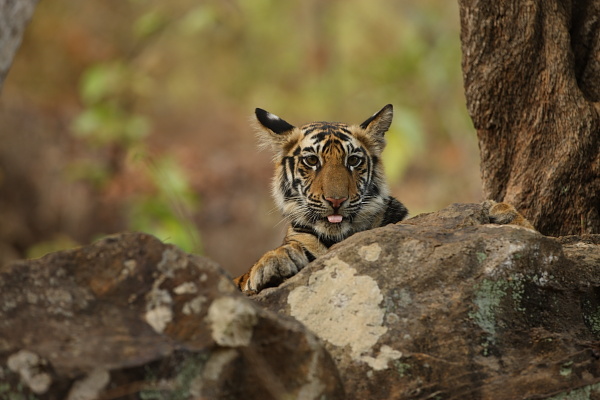 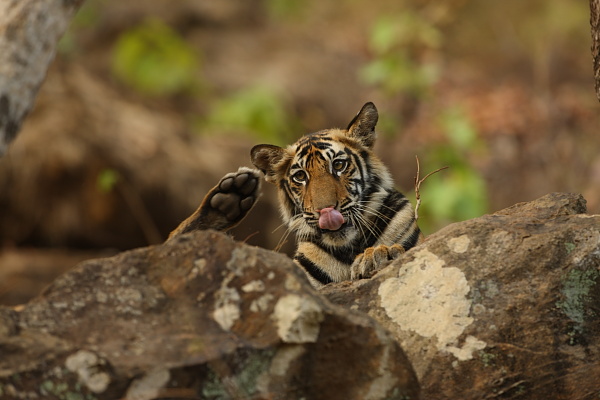 I was captivated by this display of sibling rivalry, but our few quiet tourist jeeps were soon disturbed by a number of noisy additions.  By this time, one cub was sitting on a rock overhanging the road, peering curiously down at the new arrivals who were dangerously close, peering just as curiously back at him and aiming their cell phones for a close-up shot. My heart was in my mouth as I wondered about the consequences of the cub jumping down into the jeep. Langdi would undoubtedly return, and then the only doubt remaining would be whether the photographs, phones or people ever would. Luckily I never had the opportunity or need to clear up that doubt, because my driver yelled at the other jeeps to give the cub some distance. The time for our meeting with these cubs had passed, but that rush of joy and wonder that I experienced will last for a long time.

Bandhavgarh had one more cub left in store for me, and his story is one that deserves and will get a follow-up. The Mirchaini tigress, half-sister to Langdi, was also raising her second litter, of two males and a female. We tend to picture tigers as only eating large prey like deer, but as highly opportunistic feeders, they can sometimes even feed on termites, and the kill I saw this tigress make was a mongoose. Her cubs were 10 months old, by which age they were able to roam the forests alone, and in the Andhiyari Jhiriya region, I had an interesting sighting of the smaller male cub.

We saw a crowd of 5-6 jeeps up ahead on the road, and found out that the cub was sleeping in a thicket nearby. Not wanting to add to the disturbance, I asked my driver to stay around 50m away, where we waited for about an hour. My patience finally paid off and the element of luck came back into the game when a Forest Department jeep asked the tourist crowd to move on. Right behind their last jeep, and right in front of mine, one of the Mirchaini male cubs emerged onto the road and crossed over. Coming up the road with impeccable grace, he approached our jeep and we backed away. He soon began wandering nearby in the woods, with the trees and branches providing stunning natural frames for my photographs. Evincing clear displeasure at being gawked at, he bared his sharp canines, scarcely a year old and deadly already. We left him as other jeeps reached the spot, but I would see much more of him on my next visit.

But this time, I had come to see the legendary B2, and once again the dice fell in my favour. On the 25th of May, we spotted him early one morning, but he quickly took cover. There were many jeeps lining up for the sighting, and all the guides and drivers picked positions nearby to wait for him to break cover. By-passing all these jeeps, my driver Yadavji, a 20 year Bandhavgarh veteran, led me to a spot far away, saying the tiger would emerge right here and head to the Ghoda Damon cave to rest. The tiger arrived just a few minutes after we did, and thanks to his acumen, we were the only ones there. I took some interesting shots of him coming over the uplands, framed against the sky, but he soon disappeared again, resenting the invasion of his privacy.

B2 was not called the Lord of Bandhavgarh for nothing – it was a title he had earned, and painfully so. Born in 1997, at the age of three he dethroned his famous father Charger, and took over his territories. His own brother (imaginatively named B1) fought him ferociously, but disappeared in 2002, thought to have been poached. The Rajbehra male Bokha was perhaps his toughest competition, controlling a fairly large area in the Magdhi range, but B2 retained the main tourist zone Tala, and Bokha still remained the second male of the park. B2 has fathered many of the tigers that currently populate the park, including his newest powerful rival, the New male or Bamera male. B2’s height, bulk, ferocity and charisma were unmatched but this tiger was reported to be even larger, and had been slowly expanding into B2’s territories, evicting him from his own land. After all the young pretenders that B2 had quelled, it was this male, his very own son, who seemed likely to defeat him and take his place as the dominant male of Bandhavgarh. Charger and B2, B2 and the Bamera male – history does indeed repeat itself.

When I saw B2 on 29th May 2010, he was still a majestic creature. His nose was black with age, and his skin seemed to sag ever so slightly, as the iron muscle underneath contracted. I saw him spraying a tree, still marking his territory with as much certainty as ever, however reduced his lands may be. As I watched his sinewy body striding powerfully through the jungle, alarm calls of langurs and chital resounded in the clear air. Retired he may be, but B2 will never lose the aura surrounding him, and I only regret that I was never able to see him in full glory.

This visit was a game-changer for me. I knew I would never be able to stay away from Bandhavgarh for long – it would keep me coming back for more each time. My next visit was in April 2011, and I managed to follow up on many of the individuals I met the first time. But that’s a story for another post.