This was my third visit to Kaziranga National Park – while the first visit many years back had been plagued by rain, the second visit had been outstanding – the highlight being the charge by a rhino. This time round my overriding objective was to get photographs of a charging rhino. My driver from my second visit – a guy called Kumar – was outstanding. He could spot a rhino which was merely contemplating a charge and then display incredible nerve by waiting for those extra 3 seconds which I’d need to fire away a few photographs, before starting the jeep and speeding away. This time round Kumar was busy with a National Geographic team who had been there for over three months and so I had to make do with a driver called “Phooploo Ganju” (I tried hard keeping a straight face when he told me his name but then I just gave up – his name was the butt of a lot of jokes and he was quite used to it! When I told him that his parents deserved to be sued for naming him so, he took it quite well.

Kaziranga’s habitat is completely different from that of Corbett – situated around 5 hours away from Guwahati by road, Kaziranga’s terrain is made of predominantly flat grasslands which are criss-crossed by streams and large, landlocked waterbodies called ‘beels’. During every monsoon, the mighty Brahmaputra floods the plains of Kaziranga and submerges it entirely – this flood is central to the survival of the forest as it recharges the wetlands with fish stock, clears the all-pervasive water hyacinth and brings in silt to rejuvenate the grassland.

Kaziranga remains the best place to see the one-horned Indian rhinoceros which is a globally threatened species. There are about 1855 of them in Kaziranga. The park also plays host to around 1000 wild elephants, a large population of the swamp buffalo, swamp deer and 450 species of wetland, grassland and woodland birds.

The early part of my first morning in Kaziranga was spent in running around trying to get my clearances sorted out and then finding a forest guard who would accompany us on every visit into the Park. I had arranged for permission to visit the non-tourist areas of the Park and to stay inside the jungle from sunrise till sunset. The forest guard who I eventually managed to get was a young Assamese called Deven Gogoi, who seemed to be in love with his rifle. After he learnt that I was keen on getting photographs of charging rhinos he kept talking about how when rhinos in a particular area charge, “goli jaroor footati hai” (bullets definitely get fired).

A trigger happy forest guard and an excitable driver were not exactly the partners I would have hoped for- but though I had the inclination, I had neither the time nor the latitude to choose.

My first sighting in the park was of a female elephant with a young calf who emerged out into a small clearing from the elephant grass which bordered both sides of the road. They saw us and disappeared back into the thickets. Phooploo and Deven were both very happy that our first sighting was that of an elephant, as to them it meant an auspicious start to my visit.

After some time, we came across a rhino with her calf as they were grazed in the clearing – the calf was evidently very small and seemed tired. He kept falling asleep as his mama moved around grazing. He’d wake up every once in a while to look for his mom and run to her side once more, graze for some time and lie down again. While they were on one side of the road, all the waterbodies were on the opposite side and we waited for them to get comfortable enough our presence and cross over to the other side.Waiting in a blazing sun for over 2 hours in an open jeep is not exactly fun, but when faced with sights like these, physical discomfort becomes secondary. After around 2 hours, the rhino carefully crossed the road with her calf whom she kept shielded at all times from us.

On the evening of 11 March, we saw a very touching sight. A young rhino was standing next to a very sick mother who was lying on the ground and was in so much distress that she could not even move. The young rhino was obviously disturbed by our presence, but he continued to stick very close to his mom, sometimes prodding her to get up. We quickly left the scene.

The morning of 12th March was dominated by elephant sightings. We first encountered a large “makhna” (a male elephant sans tusks), who was in a state of musth. I had earlier been charged at, by a makhna in musth in Sri Lanka’s Yala National Park. I had panicked then, but this time I was keen on getting a photograph of a charging elephant. The makhna was bothered by our presence and became aggressive. But every time he advanced towards us, Phooploo would promptly start the jeep. There was only one instance when Phooploo kept the jeep running within 10 meters of the makhna and he started blowing dust with his trunks and legs towards us. His posture very aggressive but a full-fledged charge did not happen, partly due to the fact that Phooploo was all too eager to move forward as soon as the elephant advanced even a single step.

As we drove around, we disturbed a flock of bar headed geese at a pool and just as they took flight, I could take a few hand-held photos with the heavy 600 mm lens.

As we continued to drive along the more wooded areas, we encountered a pair of barking deer (munjtac) on the forest road. They did not seem to be overly shy and the male stood watching us for some time before fleeing.

After some time we saw a large herd of elephants in the distance – Phooploo said they would cross from a particular spot ahead of us in some time. So we went slightly ahead and waited for an hour before they slowly started to cross the road one after the other. The first to arrive on the scene was a young tusker who put on quite a show for us.

We then stopped for lunch at one of the patrolling camp outposts in the Baghori range right in the interior of the forest. All these camps are manned by 2-3 forest guards (with rifles) who patrol the Park on foot. They offered me advice on what to do if a rhino charged at me when I was on foot- never ever stand your ground as you do if you encounter a tiger – the best way to flee a charging rhino is to suddenly take a sharp turn and then hope that the rhino (which has very poor eyesight and relies on his/her senses of smell and hearing) follows through for sometime along the original line, then gets confused and gives up the charge.

Of a charging rhino and panic stations

After lunch, we had proceeded around 50 meters from the forest camp, when in an adjacent clearing we heard the sounds of rhinos fighting… there were loud hissing noises followed by grunts as two big rhinos readied for a face-off. A female rhino and her calf were watching them. After one of the males retreated from the larger rhino, who was evidently an intruder, the female rhino approached the latter with her small calf. Once again there were loud angry hissing noises and grunts as the two tried to stab each other with their lethal horns.

As the Mama rhino fought, we saw the scared calf run away. Soon she gave up the fight and trotted along the side of the grassland looking for her cub as the first rhino went back to lock horns with the intruder. I was standing in the back of the open jeep with my heavy lens mounted on the tripod. I got a glimpse of the cub as it ran across the road to the opposite side, when all hell broke loose. The mama rhino suddenly burst from the tall grass hardly 15 meters and started running towards us. She looked very, very angry. Phooploo started the jeep immediately and the jeep raced along the forest track as rhino gave chase at top speed. I was trying to keep my balance in the back as I held on to the tripod and the lens for fear that everything would topple over. I was closest to the rhino, which after chasing us for over 500 meters, was quickly gaining ground. I somehow had not panicked but instead wished that I had my smaller lens out so that I could get a photograph. As all this action was going on, I heard a loud crack and the rhino stopped her in her tracks and watched us for some time. I then realized that Deven had fired a shot into the ground to scare the rhino. Happily, he said, “Sahib – See, I told you… goli jaroor footati hai”. It is hard for me to describe these adrenaline-pumping moments and expect people reading this to be able to fully comprehend what it feels like to be within 10 meters of a mad rhino, trying to save your camera equipment from toppling over as your jeep goes over an extremely bumpy road in a bid to outrun a large angry mammal with an intimidating horn.

The afternoon had more in store for us – an emerald dove on the road, a trio of swamp deer, a rhino in a beel and then very late in the afternoon, a rhino with a young calf on the road. It was one of my best days in Kaziranga – good light, good sightings and an unforgettable charge by a rhino.

This was my last day in Kaziranga and throughout the morning I had been trying to tell Phooploo that in case a rhino starts charging, he must wait for 2 seconds until he starts the jeep so that I can click a few photographs. Hence, if he wanted he could have stopped far from the rhino, armed as I was with my telephoto lenses. But this was not to be for rhinos charged us at twice during the day. The first time, I got just one snap before Phooploo pressed the accelerator over a sharp incline and the other time I managed a few photos from a jeep proceeding at top speed being chased by a rhino and her calf (though I am sure the calf had no clue – it seemed to chase us because its mom was doing so). After the first charge, I was livid at Phooploo for again not waiting for my go-ahead, but then he said that if he had waited until after the rhino had charged and the jeep didn’t start then we would have been in a major fix. He said that he had seen a rhino catch up with a jeep, topple it over and then hit it from both sides. Then he pulled out his trump card and said that of anything happened to him it was ok, but if something happened to me, then both he and Deven would lose their jobs. I couldn’t argue with that and thus ended the argument. I just reminded myself that the next time I would need to check if Kumar would be available. 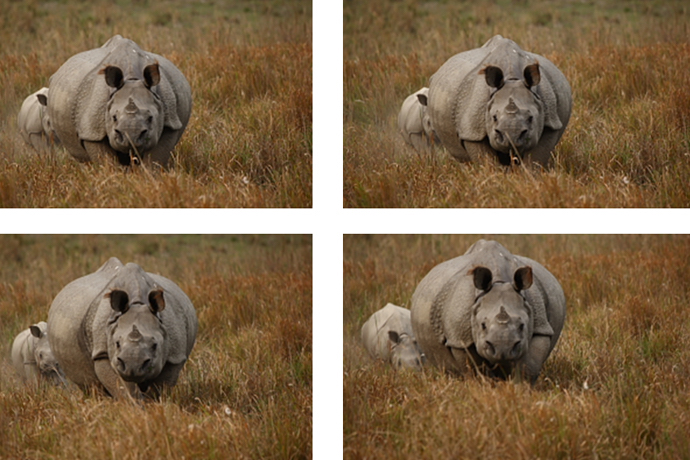