At first glance, Sewri with its decrepit factories that lie within looming walls and ships that are waging a losing battle against the elements, has the trappings of a ghost town. The smell of oil rents the air, which is already heavy with dust. Makes you balk at the idea of those flamingos flying in all the way from Kutch in Gujarat to winter in Mumbai’s mudflats turned dump yard!

The realisation of summer’s arrival is upon us even as we squint over out into the mudflats. A heat-induced haze hangs low above the water- a dazzling blaze of white that films the glutinous mud below that seems to have been roasted to resemble burnt umber. It seems almost blasphemous to be out in this heat but as the bard said time and tide wait for no man. Neither do flamingos. The best time to watch flamingos is two –three hours before high tide, for this is when the birds come closest to the shore, where they feed. When the tide sets in completely, they fly off to roost in the adjoining mangroves. And as it recedes, they forage further out into the sea. Subject as we are to the vagaries of the tides that determines the clockwork precision of its creatures, we set out in this heat! 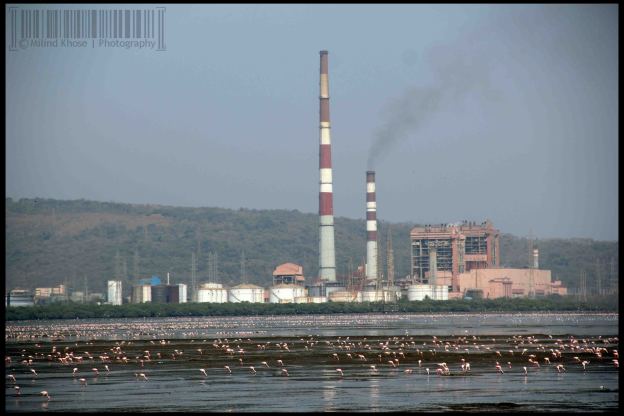 At the jetty, we clamber onto the rusted hull of what seems to be an abandoned ship that gives off a strange odour of a salty sea breeze mingled with that of fish. Jungle crows sail awkwardly on the wind keeping a keen eye for tidbits that lurk in the mudflats below. Fiddler crabs scuttle leaving tiny prints in the wet mud that are quickly filled in by flowing water. Mudskippers bask goggle-eyed on rocks, like grotesque miniature mermaids. The guests of honour meanwhile care little for the attention that is being showered on them. Their sinuous necks buried in the mudflats, they stir the water with their feet and scoop food material into their beaks, which is then strained by their sieve-like tongues that are modified for this purpose. For those that think eating food by colour is a modern day fad, consider the flamingo. While it feeds on mussels and crabs, it also eats algae that contain certain pigments, which gives the flamingo its pink hue. Here, in the subcontinent, two species of flamingos are to be found-Grater Flamingos and Lesser Flamingos. While Greater Flamingos are a soft shell- pink that fades into white, Lesser flamingos are much brighter-the colour of cotton candy. The latter’s bill is a deep crimson unlike the black tipped bill of the former. By February, each year, around 10,000 Lesser flamingos and close to 5000 greater flamingos can be found here. 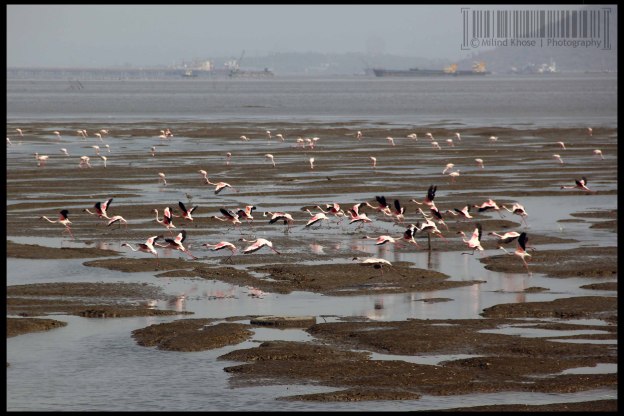 As the tide draws nearer, the flamingos come closer to the shore. Some are almost within touching distance. The antecedents of some birds have confused us-they lack the brightness of the Lesser and the softness of the Greater. In fact, they are the colour of dirty, unwashed linen. Juveniles, we realize. Now the whole flock has come close looking like a giant pink wave gently laving the shore. In spite of the pollution and dirt all around, the fecund ecosystem obviously offers enough food and shelter to these birds to tempt them to stay 6 months, every year. The presence of other waders testifies to this. Sandpipers race each other on legs that whir like clockwork. We’re amazed at the deftness and swiftness of these little creatures in this mud, which should we try to tread with our plodding human feet would result in a rather miry affair. Plovers tread gingerly on the banks, daintily poking their heads into the mud looking for a careless fish or worm. The terns glide above the lesser mortals that must traipse through mud to find their food. Occasionally they swoop down, their compact white bodies providing a striking contrast to the mud. Most of the time it is much ado about nothing but this doesn’t seem to discourage them. Two children behind us have been given the task of making a checklist by their father- a wily ruse that allows him to concentrate on his photography. We get cheap thrills from listening to them squabble( I saw three, you saw two!) .The parent pays no heed to the contest that he instituted, focusing on the lives of barnacles instead. Blistering or otherwise, these crustaceans seem more comfortable than any of us as they spend their lives attached firmly to the rocks.   An hour has passed and the sun has gotten less harsh but the tide is slowly coming in and the flamingos are moving away. Timing is everything rue photographers as they try to capture the flamingos as they move away. As if to provide consolation, some flamingos lift off and fly on further.

The flight of a flamingo is marked by effortless grace. These birds cut a fine figure as they sail through the air on wide wings, their long legs like vermillion streaks in a twilit sky. No wonder then, that a group of flamingos is called a ‘flamboyance.’ The shutters of cameras sound quickly as they preserve this vision. Meanwhile the tide is drawing near and the flamingos are afar. 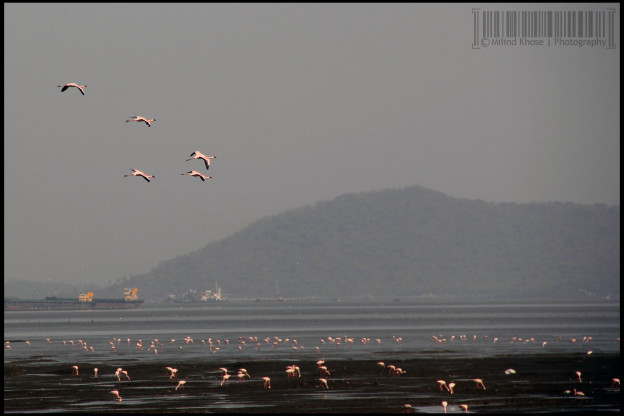 However, all’s not well in this version of paradise. The proposed trans-harbour link that will connect Sewri to Nhava Sheva will run through the mangroves thus destroying the mudflats. Organisations like the BNHS are of the view that diverting the link by a few metres can salvage the mudflats, which currently, are the largest suitable habitat for flamingos in Mumbai. However, the benefits of the mudflats are not limited to the flamingos. The species that inhabit an ecosystem are an indicator of its health and vice versa. Flamingos and other waders flock here because their food i.e. crabs, fish and other benthic organisms that they feed on are available in plenty, which in turn means that the mudflats are able to sustain these organisms. As a habitat type, mudflats are extremely important for various reasons. As seen here, they serve as feeding grounds for waders and waterfowl, some of which are migratory. These mudflats also act as resources for fisherfolk who depend upon them for their livelihood. In the wake of recent environment disasters like cyclones and tsunamis, the presence of these mudflats, alongwith mangroves helps in preventing coastal erosion.

The fight is on to preserve this patch, which is already in the running for the tag of Ramsar site that will bolster the protection offered to it. And it’s one worth winning if it means that the city gets to keep its date with these waders. Year after year.