My very first visit to Bandhavgarh had got me hooked – the two sets of cubs were irresistible, and I couldn’t make myself stay away for long. I gave trusty old Yadavji a call to find out about what kind of sightings to expect, and was a little discouraged by what I heard. He advised me not to come, since sightings had been poor. But I decided to go anyway – this time I would pay for special still photography permissions, which would allow me to stay in the park all day, thereby increasing my chances.

I was looking forward to following up on the tigers and cubs I’d seen on my last trip, about 11 months ago. Unfortunately I had read reports earlier of the death of Langdi, the Chorbehra female – that was one story that had reached its end, and it was a gruesome one too.  Kankatti, the one-eyed tigress, had crept up on the sleeping Langdi and not only killed her but devoured a considerable portion of the carcass. Tiger cannibalism is not unheard of, but is an extremely uncommon phenomenon particularly among adult females. What’s more, the tigress Kankatti had been trying to kill the Chorbehra female cub as well, to remove another potential rival. In a touching twist, the male cub was being extremely protective of his sister, and eventually both had been driven away from the territory that was once their mother’s but now belonged to Kankatti. The story hits hard, but it just drives home the unpredictability of nature – it is not ours to control, and to attempt to do so is utter foolishness.

On the very first day, we decided that tracking down the Mirchaini cubs was our best bet, so we headed in that direction just after dawn. We were forced to take a longer route, since the direct road was still shut because of the enclosure around the Jhurjhura cubs. We were not to be disappointed. Near the Patparra Nallah area, the two Mirchaini male sub-adults were on the road right in front of us, welcoming me to Bandhavgarh. While I frantically tried to get my cameras and lenses out of the bags, the larger male walked regally away, and the smaller male sat down on the road looking at us. There was something odd about him, and taking a closer look, I realized he had porcupine quills embedded in his chest. The poor tiger must have tried to attack a porcupine that had backed up into him, stabbing its painful spikes into his chest. Luckily they were not too deep, and the young tiger was able to get them out over the next few days. This was the same tiger I had photographed among trees and on the road last year in May.

For a tiger-lover, there is a profound sense of joy in seeing the same animal on different visits, watching it survive the unforgiving wild and achieve adulthood – an achievement indeed. You feel an odd mix of pride and humility, to have glimpsed and to have been allowed a glimpse into such a secretive life. I would go on to spend most of the next month observing these reclusive cubs and the experience is one I wouldn’t trade for the world. 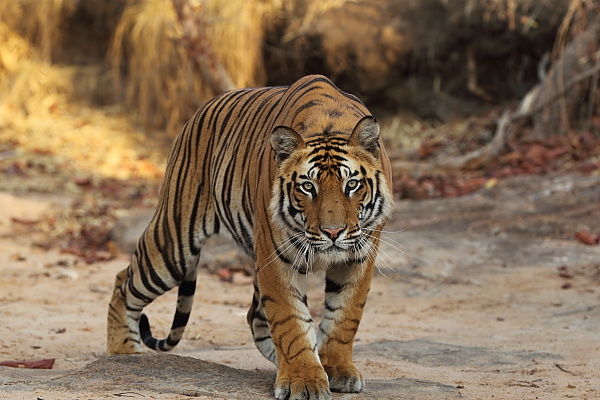 Every morning, we would make a beeline for the Mirchaini area, where on lucky days, we would find the three sub-adults, two brothers and a sister. It was one of those days that gave me some of the best tiger shots I’ve ever taken. We had stopped the jeep on the road in the middle of the Patparra Nallah, in response to alarm calls resounding in the air around us.  The larger Mirchaini male appeared from around the corner and dropped into a low crouch, stalking the jeep. It was my closest encounter with this tiger, and the impression it left on me was huge.

The larger Mirchaini male had caught my interest early, but the incident that really had me fascinated was the hunt I was privileged enough to witness. In 15 years of visits, I had seen a tiger stalking maybe three times, never close up, and never actually making a kill. The chase I saw fit all those criteria. This tiger is one that has firmly captured my imagination – his story can be found in detail here [link]

The Mirchaini siblings often shared meals, and this sambar carcass was no different. However on this kill, their father, B2, occasionally joined them, which was surprising because adult males usually see sub-adults as rivals. But B2 was now a shadow of his former self. I saw him seven or eight times during my trip, and it was evident that hunting had become very difficult for him. He was taking whatever he could get, which unfortunately included cattle from the neighbouring villages Gata, Damna and Ghangar. He is in the twilight of his life, and his passing will bring with it the end of an era.

The tiger that has replaced B2 as the dominant male and taken over his territories is the Bamera male, who also I was able to see. One morning, on the way to Mirchaini, near an open meadow at Chakradhara, we saw the Bamera male with Kankatti.  The male was about 30m from the road, and the female 60m, but they soon moved further away to a spot in the shade. She was spraying trees, rubbing her head against him, entwining tails – all clear signs that she was in oestrus. I had never seen tigers mating, so we waited there hopefully. The Bamhera male seems to be an extraordinarily lazy tiger, often sleeping the day away. This day was no different – he didn’t show the slightest interest in Kankatti, choosing instead to simply laze under a tree. We decided not to waste any more time waiting for him and continued on our way.

As for the other tigers I’d seen, I was informed that Kallua had moved out of the park in search of new territory, and the two remaining Jhurjhura cubs were still in their enclosure. The Chorbehra cubs, as I said, had moved to an area close to the main road between Tala and Umaria to escape Kankatti.

Spending an entire month in the park gave me a whole new perspective on Bandhavgarh – the insider view, if you will. The sightings overall were nowhere near as bad as the dire warnings of my driver had suggested, and I was able to see many bird species as well, like the Brown Fish Owl, the Crested Serpent Eagle and others. However, a matter of grave concern was that, based on observation, the number of chitals had dropped drastically – if the trend were to continue, Bandhavgarh would no longer be able to support its current density of tigers. To prevent this, the Forest Department was in the process of implementing measures to bring back good quality grass for grazing, which would help increase the population.

For me though, the month of April was all about the Mirchaini siblings, particularly the larger male sub-adult, who was a magnificent specimen. What was to transpire in his life in the coming months saddened me no end, and his stories and sightings have inspired an article [link] of their own. The Mirchaini male cub, who had been my muse for the whole month of April, would no longer roam free in Bandhavgarh.