We often spend time in the Dankuni wetlands to conduct research investigations or monitoring illegal dumping – the last contiguous stretch of marshes in the lower Gangetic floodplains, with it’s fate dangling from a thin line – a decision. Two parallel forces with the one emerging victorious deciding the fate of the marshes. While industries seek to drain out and bury the wetlands under concrete,  a group of activists, local and state organisations  have moved to court on the ground that filling a wetland is illegal. The petition is still ongoing.

As is the character of our system, money has found its way in. Political pressures are mounting by the day on the wetland defenders. The message – take the money and back out. Scientists refuse to give in reports, organisations step back. But for some the fight is not over.

During one of these investigations, we were introduced to a flowering plant called Shola by a mentor. Shola stands for the white spongy material that adorns the bride-and-groom’s head or forms the décor of deities. Ancient tales speak of a deity desiring a white headgear and garland for his wedding. It was his desire that gave birth to Shola – a plant with a spongy, white, malleable core.

And Shola is a plant of the marshes – signifying union and celebration.

But here is a fact – more than half the marshes are gone from the floodplains of lower Ganga.

Shola has become a costly traditional craft. It’s demand as a scarcely available product has made it so. A plant of vanishing wetlands wetlands, that store water and sieve nutrients from gushing rivers and store carbon, opening up of which, releases carbon. Carbon which is poisonous and  yet we cannot stop ourselves. As a species we seem to be addicted to creating  new ways in commit suicide.

The thought scares me sometimes. Times of scarcity have not hit us yet; obviously we do not feel it has. But one cannot deny that food and water is getting scarce which is an alarm call for our survival. How can our population sustain itself when the very resources we depend on for life are disappearing? Or will these resources become so costly that only a few rich influential can afford them?

But even for them, Stephen Hawkins has a message. “It will be difficult enough to avoid disaster on planet Earth in the next hundred years, the human race shouldn’t have all its eggs in one basket, or on one planet. Let’s hope we can avoid dropping the basket until we have spread the load.”

However disturbing or scary it may seem, this is a reality which we cannot choose to ignore anymore, no matter how much we are addicted to living within a  bubble of denial and its numbing effects. Because as is true for bubbles, they will burst one day. What are we to do then?

If our house catches fire what grips us immediately is anxiety. In this scenario, if we are told to find a way out of this situation, are we to get depressed or act on it asap?

Many who are in this field believe that something can be done but only if we start acting on it now. We need to understand that this is a critical time. We can still decide (collectively) to build on a change for the better.

How fast we do that, will determine our fate. It will either be the Anthropocene – an epoch which like the others before it, will come to an end. We will die out, miserably. Or it can be the Age of Ecology. A new path for humanity in which we imbibe and practice principles of interdependence and co-living.

Conservation has to be practiced based on ecological principles. Quite simply, we have to believe that our resources are threatened so we are threatened. Conservation is no longer a service to the planet, it’s our duty.

Back in Fishing Cat Land, what was once a bus ride along vast beds with thick blades is no longer as interesting. The breeze that shreds the cottony clouds of October soothingly cajoles the fluffy white flowers of ‘Kash’, a grass-like-plant of the wetlands. But now, the few that are remaining, are also cordoned off and  will probably soon to be slaughtered, replaced with factory clunks and thick industrial smoke.

Hogla stretches, formerly lush, strong and green now  look like refugees alienated by industrial complexes, the water around them black and frothy. Yet in their younger days, people as-old-as my grandparents, used to drink water from the base of Hogla. These plants were known to absorb heavy metals and remove impurities. Even though osmosis-reverse osmosis water purifiers sound fancy, our re-invention is less-efficient and more costly. Science was meant for bigger things! 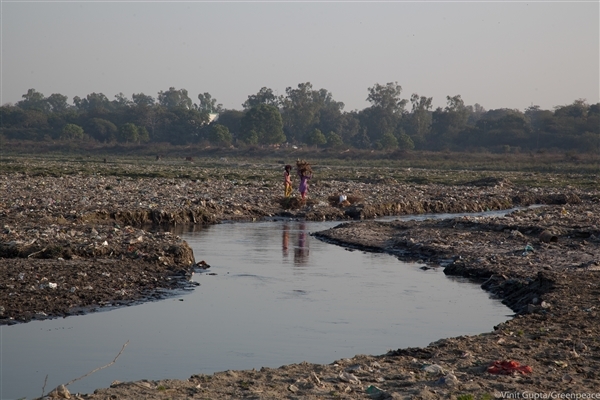 Sight of a degraded wetland

But not all is gone. Holding on to the remaining patches seems the most logical thing to do. How do we hold on and get others to hold on too, across society? If it is clear that we don’t want to cut the branch we are sitting on, it should be easier to decide which side to take and then act on it.

There is hope, still. Hope and a dream of a peaceful world, a beautiful world. I listen to the song Imagine and it sounds like home. Little, simple things that bring happiness.

But there is a mountain to climb. Lets not avoid getting depressed and anxious, it is time to face our fears. The fear, that the system is crashing and the world will go down with it if we do not adopt a newer system, an ecological system.

Science tells us that our body is flooded with norepinephrine and cortisol when we are anxious. These chemicals are designed to boost perception and speed reflexes to fight the threat. From pushing more blood to our muscles to getting more air into the lungs, the body is more alert than ever to fight for survival.

If we overlook the symptoms of the dying world and vanishing species, danger will hit us so hard that it will paralyze us beyond activity. If we try, things can happen. If we don’t try, we will never know. And then it might be too late. That’s what most of us feel. Let’s just act.