The morning of 8th September began on a fantastic note – a sunrise to remember (as Michael, my naturalist, described it “What a way to start the day”), three white rhinos laying down on the road in beautiful golden light (my first sighting of the white rhino) and a female leopard crossing the road in front of us. Then came the African wild dogs with the pups – and that’s when it all started going downhill. What transpired afterwards was a stark reminder of the unforgivingly brutal spirit of the African bush, the transience of life in the wild, Darwin’s theory of “Survival of the Fittest” and the ephemerality of my own emotions.

Elation….
The rhino sighting had been made more special as I got down from the Land Rover to photograph them from a prostrate position on the ground. As Michael and Jeremiah (my tracker) kept reminding me to keep my movements to a bare minimum, I lay on a termite mound just 10 metres away from the grazing rhinos. Then one of the rhino cows turned towards me and started slowly walking in my direction. I could hear Michael saying in the background “If she comes any closer, slide backwards off the termite mound and get in close to the vehicle”, while Jeremiah with all his experience in the bush sagely whispered “it will be all right”. But thankfully she passed me around 5 meters to my left. The other cow followed in her path but the bull rhino passed by much closer. Michael kept whispering to me “Be still” but the ground level shots were too good to ignore – the shutter kept clicking away as the rhino passed within a few meters of me. Even after all my years of being in the wild photographing various animals, the close-up view from the ground-up of a really big rhinoceros with two horns which could have gored me to death instantaneously, put the “wild” into a totally different perspective.

It was heart-stopping, but it got the adrenaline flowing for sure. And the photographs were obviously worth the risk!

As if the rhinos were not rewarding enough, we soon drove to another spot where two other jeeps had sighted a female leopard. She crossed the road in front of our jeep and disappeared into a thicket. As we maneuvered our vehicle to get a visual on her, suddenly a pack of African wild dogs including five pups trotted out from the bush and cantered away from us. 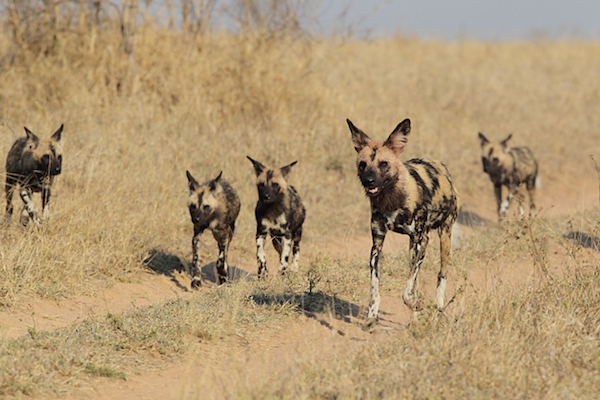 The African wild dog is one of the most intelligent and beautiful animals in Africa – it is also highly endangered. Wild dogs live in packs with members being very loyal to the pack and its leader – they are expert hunters who traverse large distances with the pack hunting as a single unit. But this tendency to travel large distances brings them into contact with various predators rendering them extremely vulnerable to attack themselves. There have also been instances of the entire litter being wiped out at their den by lions when the pack is out hunting. With the prevalent high mortality rates, the mother and other members of the pack take extraordinary care of the young. 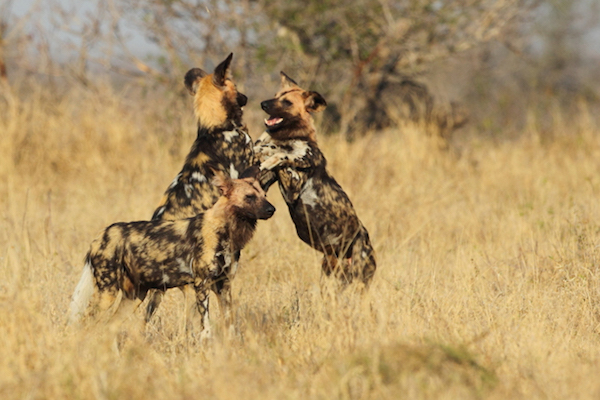 The next 20 minutes was spent in following the wild dogs and trying to get into a good photographic position as they trotted past panicking herds of impala and a big rhino bull. Then the alpha male of the pack entered an area with thick undergowth and that’s when the singularly outstanding morning suddenly turned into a horror show. 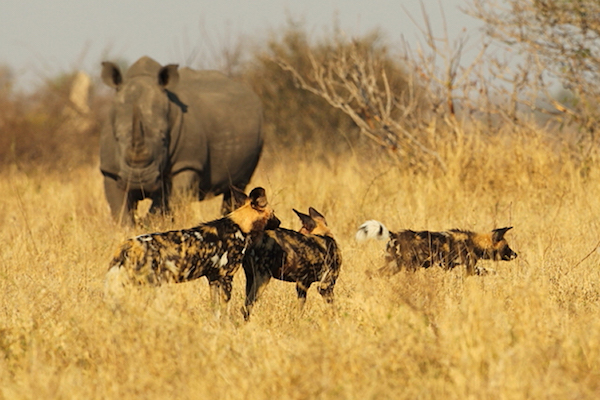 Depression….
As the pack followed the alpha male into the dense thicket, our Land Rover too made its way into the undergrowth with all of us ducking away from thorny trees and shrubs. Suddenly we saw a leopard (turns out was a male leopard called Pinky) come out of nowhere and slam into one of the pups who was trailing. Before the pack realised what was happening, the leopard had mauled and severely injured the pup.

But it was always going to be a suicidal attack borne out of desperation for food – the pack was soon upon the leopard in a huge melee of dust and snarling, twisting bodies. Just as we thought that the leopard was about to be killed, he managed to shake the wild dogs off for a brief second and rushed onto a nearby tree with the wild dogs in close pursuit. 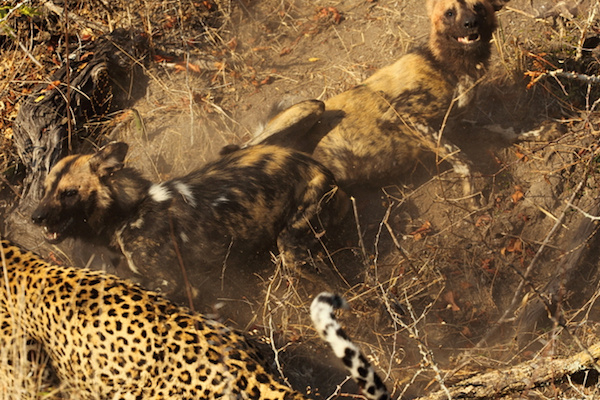 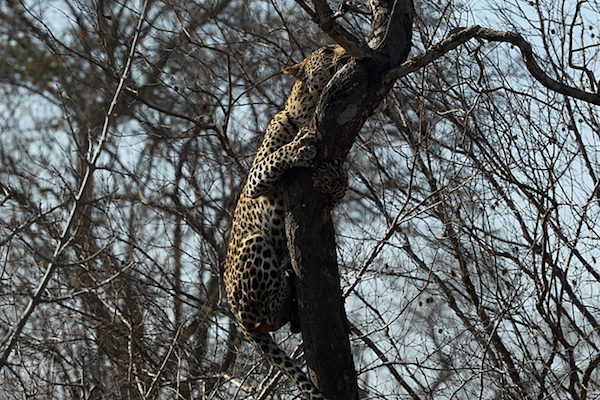 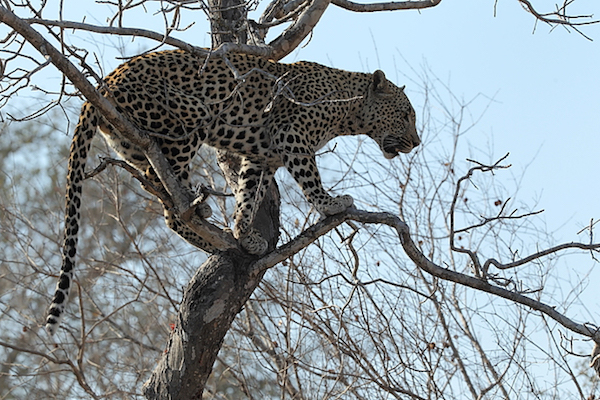 Fortunately for the leopard, wild dogs cannot climb trees. All this had happened in maybe 5 seconds while our vehicle was still coming to a stop.

As the wild dogs were jumping and rearing at the base of the tree, the pup continued to writhe and squeal in pain. Unfortunately the commotion had attracted the attention of three hyenas who were at the scene and on the pup in 10 seconds. One killer bite with the powerful jaws and the pup, who I had been photographing a few minutes back was gone. The wild dogs rushed back towards the hyenas biting them on their hindquarters but the much more powerful hyenas rushed away with the pup. They stopped within 5 feet of our jeep and commenced tearing the flesh apart and eating the pup. 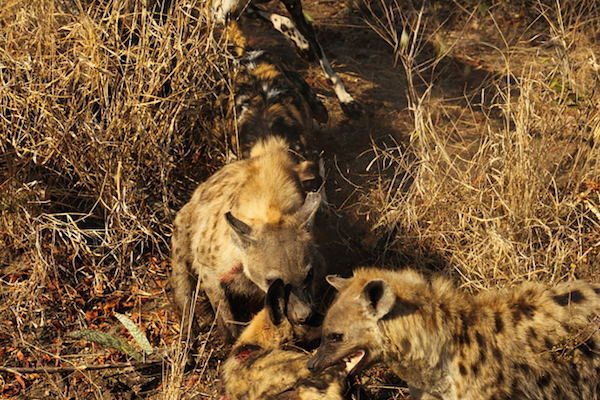 Their shrieking as they tore into the flesh was nightmarish, the cracking of bones sickening and the sheer horror of the scene extremely unnerving.

In the meantime, the wild dogs had cut their losses and moved away from the scene. 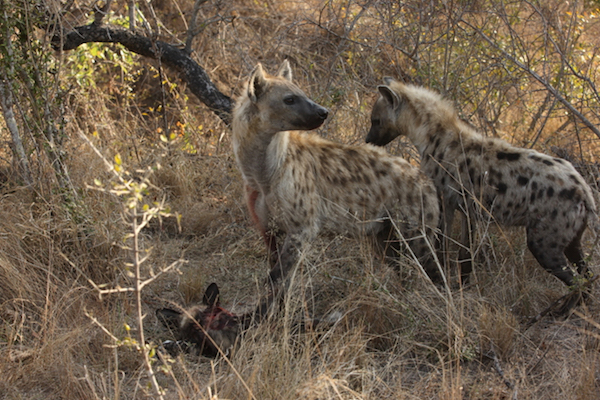 And so it remained – a starving Pinky on a tree looking at the hyenas feeding on what was rightfully his meal, the shrieking hyenas clearly the victors in this macabre drama of death, a mom bereft of a pup raised through a lot of hardship, a pack missing a young member and a dying species one less in number. 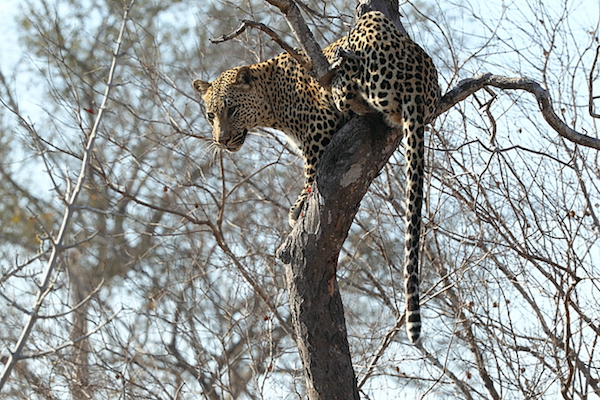 To us, the whole experience had been very humbling and intensely emotional – a stark reminder of the unforgivingly brutal spirit of the African bush, the transience of life in the wild, Darwin’s theory of “Survival of the Fittest” and the ephemerality of my own emotions.