In what has developed into a classic case of “whodunnit”, a 10 year old tigress locally referred to as the Jhurjhura female died in the main tourism zone of Bandhavgarh National Park on the morning of the 19th of May. Bandhavgarh is widely recognized as one of the foremost hotspots for tiger tourism in a country which has finally recognized the need to save its national animal.

The case is a stark reminder of the responsibility which everyone (tourists, photographers, Forest Department staff) shoulders when we drive inside an area where animals have right of way.

Facts of the case

•    17th May (evening): The tigress along with her three 6 month old cubs was seen and photographed by tourists.

•    19th May (morning): One tourist jeep reported that the tigress seemed to be in distress and a Forest Department vehicle was immediately dispatched to the scene. In the meantime, at 5:58 am another tourist jeep also confirmed the original reporting of a possibly wounded tigress. A short time later, there was a report of this tigress charging at another tourist jeep.

•    The autopsy report has concluded that the tigress died due to internal bleeding caused by a collision (most likely vehicular). The nails/claws of the tigress were also completely eroded suggesting excessive friction. There is a possibility that the claws could have been eroded as she tried to grip the ground when being pushed ahead by the vehicle as it braked.

•    There are unconfirmed reports of other “VIP” vehicles having entered the Park and having exited well after tourist hours. All Forest Department vehicles have been examined and the examination reports are awaited.

•    Three officers (1 ACF and 2 Rangers) of the Forest Department have been suspended on the 25th of May – there is no evidence of their involvement, but is a pre-emptive action to put pressure on the remaining staff to divulge information.

So the accident seems to have occurred on the 18th night or early on 19th morning – the vehicle and the driver remains unknown after more than 10 days now. A case of “hit-and-run” of a loving mother….

* I reached Bandhavgarh on 19th May with the twin purposes of (a) wildlife photography and (b) to meet Park officials to understand the specific problems of the Park – a few of which perhaps we at the Last Wilderness Foundation could help to address.  It was at the hotel that I learnt of the distressing news of the death of a tigress (at the time age unknown) on the morning of the 19th reportedly due to an accident with a “tourist vehicle”.

I finally succeeded in meeting the Field Director of the Park, Mr.Chandrakant Patil late in the night on the 19th – Patil himself had driven down from Bhopal on the 19th and had spent the whole afternoon and evening assessing the situation on ground. In that brief meeting with him, I was impressed by his openness and willingness to share information as also his single-minded devotion in identifying the culprits. Since then, I have been closely interacting with Patil on the issue.

There has been a lot of irresponsible reporting by the media (both print as well as electronic) over the last few days – in fact since 19th itself. The media has blamed everyone from the sons of two ministers, to a vehicle driven by a Forest ranger, to an anonymous tourist jeep.

In the meantime, Patil has single-handedly gone through interviewing everyone from his own staff, to all the park guides and drivers.  This article is intended to serve four purposes (1) to present the facts from the ground (2) to talk about a loving mother who is no more (3) to praise a Forest Department officer who has till now done an exemplary job and (4) to pray for three innocent cubs who have been orphaned.

Since I had been to Bandhavgarh only once before, I did not have any prior pictures of the Jhurjhura female as the tigress was called – Sachin Rai was kind enough to share his pictures with me. In fact Sachin was there at the Park for two weeks till the 15th evening and had seen her and the cubs.

Almost all the guides and drivers talk very fondly of the Jhurjhura female. She was one of the most widely photographed tigresses of Bandhavgarh – she was also a caring mother. In a species which has a mortality rate of over 35% for cubs within their first year and over 10% for cubs in the 1-2 year bracket and a much higher number for the 2+ year “transient” adults, the Jhurjhura female had already successfully raised her first litter of three cubs. These 3 cubs are now transients who are three years old and live in the Tala range of Bandhavgarh – they shared the territory of their mother till her death.

Her second litter has 3 cubs (which are 6 months old) – 1 male and 2 females. Drivers tell of how she used to sit in the middle of the forest road in between tourist vehicles to help her “vehicle-shy” cubs to cross the roads one at a time. She would get up only when all 3 cubs had crossed the road and safely reached the other side.

Below are some heart-rending pictures of this caring mother and her autopsy – robbed of living her full life by a heartless driver who has caused the death of not just a loving mother but in all probability, will also be responsible for robbing three playful 6-month old cubs of their chance to live a free life in the wild.

Please note that some of the pictures are graphic but having been witness to the whole autopsy, the shock of it all is a stark reminder of the fact that the least we can do for our national animal is to protect it and bring its killers to justice. 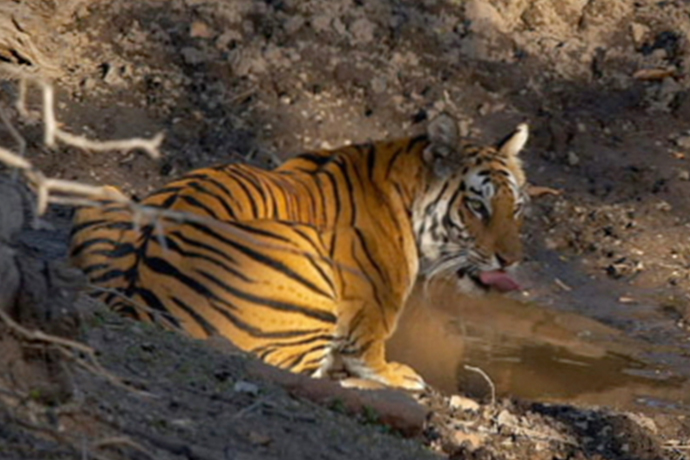 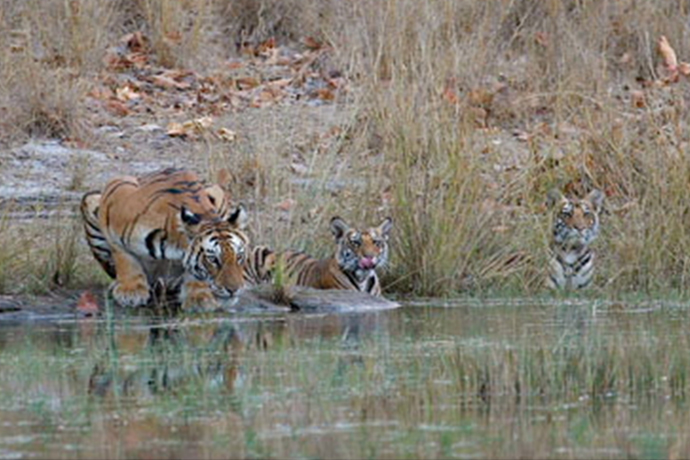 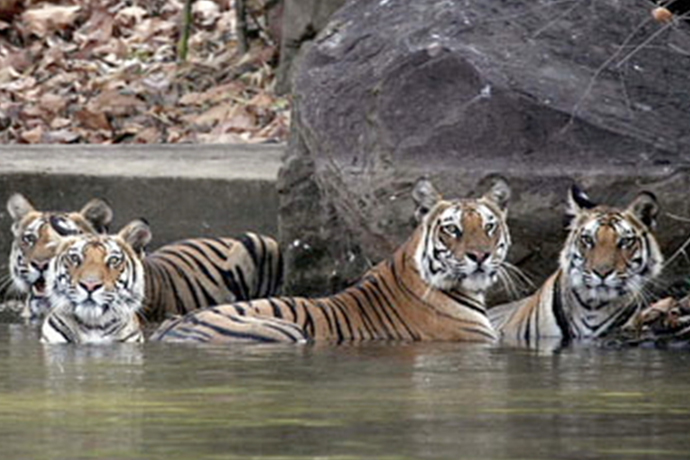 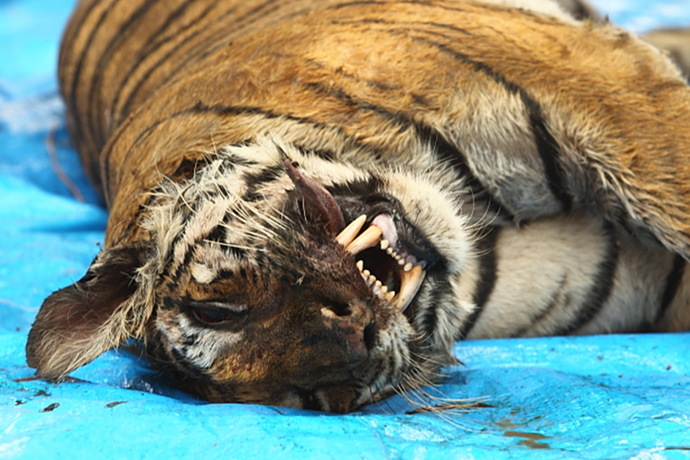 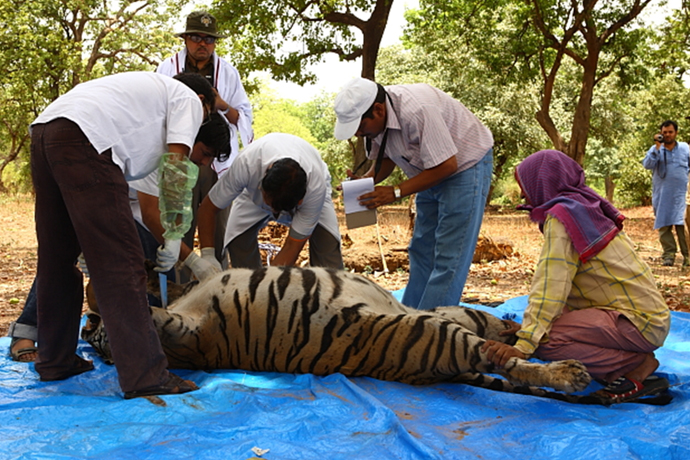 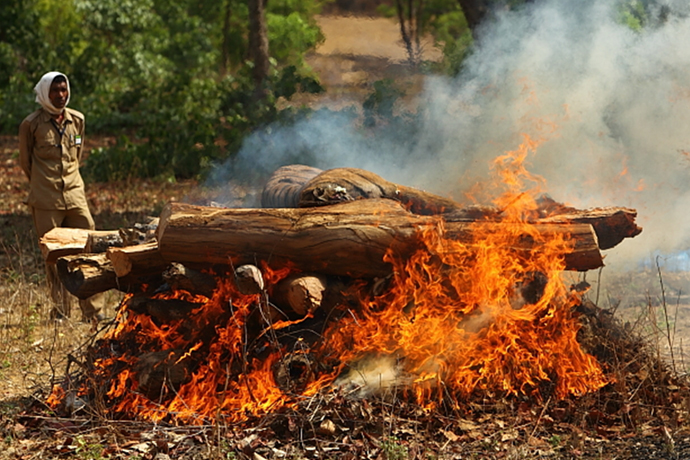 An officer of the 1987 IFS batch, Mr.Chandrakant Patil assumed office as the Field Director of Bandhavgarh in 2009. Prior to that, he has been posted in various parks in the state of Madhya Pradesh.

With the media blaming everyone from ministers’ kin, to a forest ranger, to an anonymous tourist vehicle, he has worked tirelessly in trying to piece together what exactly happened to the tigress. He deserves all the support he can get as he tries to painstakingly gather information from various sources and solve the case before it becomes yet another one of those police cases in India which eventually go to court and then are lost forever.

In what is not so well known, Patil and his Forest Department staff, in an excellent example of how some dedicated people give off their best to allow the tiger to survive in the wild, has over the course of the last 12 months embarked on a programme to reintroduce three cubs orphaned last year into the wild. The mother of these three cubs was poisoned last year when the cubs were 8 months old. Since then, the Forest Department has been taking care of the cubs and is trying to train them with the objective of reintroducing them into the wild. These cubs, which are now sub-adults currently live in a 20 hectare enclosure in Bandhavgarh National Park. The area of the enclosure is being slowly expanded as the cubs become more proficient in hunting and a steady supply of chital (spotted deer) is introduced into the enclosure.

The ones left behind….
The Jhurjhura female’s current litter…. Now orphaned

The demise of the Jhurjhura female rings a death knell for her three cubs, which are left behind – too small to have learnt how to hunt, they will surely die if left to themselves in the wild.

While Patil tries to solve this case of “whodunnit”, he is also keeping an eye on the three cubs that have been orphaned. The Forest Department will take care of the cubs and is already feeding them – but one thing is certain – the death of the Jhurjhura mother has meant that a life in the wild may have just become very difficult for three innocent cubs……